It only takes one major case to transform public perception and spur action at the highest levels.

In the past year, three front-page incidents (just a few of many) shone an even greater spotlight on the challenge of workplace sexual harassment, violence and bullying. Each case was unique and distinct, but together they served to crystallize public sentiment around the notion that inappropriate workplace behaviour should no longer be tolerated.

The highest profile of the three—allegations that Jian Ghomeshi, former host of the globally-syndicated CBC radio program Q, had physically abused several ex-girlfriends and bullied co-workers—sent shockwaves through the Canadian media landscape a year ago this week. Chatelaine magazine invited me to comment on employment law repercussions stemming from the Ghomeshi incident in a recent issue. You can read the full article here.

Shortly after the Ghomeshi news broke, two Liberal Members of Parliament were expelled from caucus following allegations of sexual harassment and misconduct. The following spring, a news reporter challenged a group of male soccer fans when one of the men hurled a now infamous (and highly vulgar) phrase that I’ll only abbreviate here as FHRITP, following a Toronto FC home game.

It’s fair to argue that fallout from these incidents is prompting real and meaningful change.

They have not only increased awareness about workplace sexual harassment and sparked an important conversation around the way organizations should deal with the issue as they endeavour to provide safe workplace environments for their employees, but have sparked a more widespread societal reaction.  Social media outrage was swift following the Ghomeshi news, for example, with the hashtag #BeenRapedNeverReported emerging as a platform for sexual assault and harassment victims to share their stories.

Provincial governments are also treating the matter with heightened seriousness as citizens from across the political spectrum have demanded a rapid and comprehensive response. This week, for instance, the Ontario government tabled Bill 132, the Sexual Violence and Harassment Action Plan Act, requiring employers to enhance their sexual harassment prevention programs, while obligating them to investigate complaints of sexual harassment.  We will provide a thorough overview of the new Bill’s proposed workplace-related statutory changes in next week’s post.

“Our action plan is a roadmap to taking action to end sexual violence and harassment in Ontario – through raising public awareness, helping survivors, and strengthening laws to protect workplaces and campuses,” Ontario Premier Kathleen Wynne said in a statement. “By working together, we can help make sure everyone in Ontario can live free from violence or harassment.”

Anecdotally, I can confirm that a number of employers have approached our firm seeking assistance with workplace sexual harassment investigations in recent months. Others have sought help to develop zero-tolerance policies to protect their workers.

The trend is promising because it’s only when employers begin taking sexual harassment seriously that the problem can be minimized. It appears that the days of Mad Men-esque workplace harassment and misconduct are (thankfully) becoming a thing of the past. 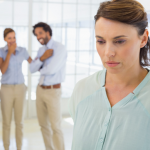 The good fight against workplace bullies