In the fall, we wrote about the WSIB’s new Rate Framework (read about it here). The public consultation on the draft policies, which was originally scheduled to end on October 13, 2017 and was extended to December 5, 2017 has been extended again to January 15, 2018. 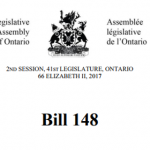